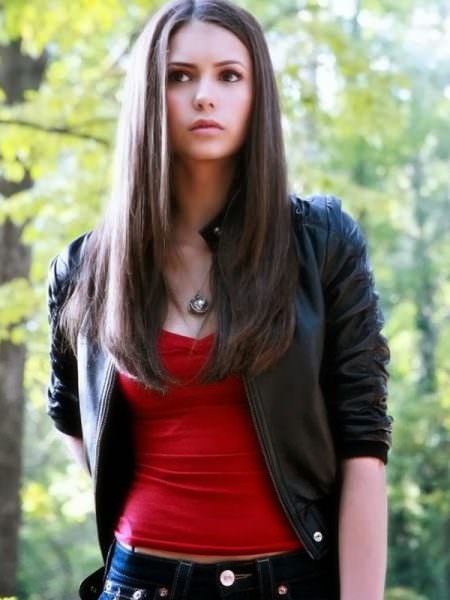 Though standing only 5'4" tall, the alluring creature before you still manages to draw the eye with a subtle, delicate charm and grace, a slender, almost feline frame, and classically beautiful features that could melt even the coldest heart. Large, emerald eyes peer out from below her slender, crescent shaped eyebrows, and a small pert nose perches above her full, heart-shaped pink lips. Only a hint of her age is beginning to show-- smile lines at the corners of her nose and eyes that suggest a perpetually good mood. A light dusting of makeup softens the already vibrant glow in her cheeks, and a long mane of mahogany tresses highlighted with lighter streaks tumbles from and off center part to frame that angelic visage, its gentle waves broken only by the curve of her narrow shoulders as it crashes past them to fall to her chest. Petite and slender, the young woman's body is neither plump nor sturdy. Instead, she bears the physique of a woman that merely keeps in shape. Her chest is modest and well-proportioned to her slight shoulders, and her slender waist is drawn into a narrow, hourglass curve that emphasizes her flat tummy as it swells once more to her hips. She appears to be in her mid-twenties, her long, coltish legs making up most of her height and perhaps her most eye-catching features aside from her deep, warm eyes and alluring face.

A plain, red tank-top with a scooping neckline clings to this girl's frame, the material stretching enough over her chest and tummy to be flattering. However, it's worn underneath a black, leather jacket that has three-quarter sleeves that bunch up just below her elbows, leaving her forearms bare. Slung low around her waist, a wide black utility belt with several pouches exposes a very slender strip of the bare skin of her midriff just above it. Below, black, leather pants fit snugly around her thighs, accentuating the shape of her legs down to a pair of knee-high, black boots that have low, blocky, but feminine heels and thick rubber soles that cushion her steps.

Slung against the outside of her right thigh rests a blaster pistol in a quick-draw holster.

More people know Aria by her holonet name "Jade" than by her given name-- one that, if anyone dig some digging, had a rather colorful past tied very closely to some wealthy Coruscanti types. People looking for Jade are usually looking for some slicing or forgery of one type or another, and most days those that have met her in person have reported she's been spending a lot of time on Nar Shaddaa. There's rumors she had some involvement with the Resistance of some form or another, but most of that's hearsay.