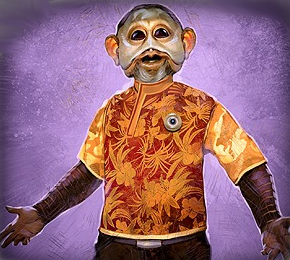 Recently fired from SoroSuub for incompetence Bex Bryl promptly left Sullust to strike out on his own in the wider galaxy. After settling his outstanding debts he has few possessions but is determined to find what adventures the galaxy can offer an itinerant Sullustan. He is currently looking for work so if you have a problem, is no one else can help, and if you can find him... maybe you can hire Bex Bryl!

With grey skin, those massive black eyes and his dropping jowls (called dewflaps) that sag below his jaw-line Bex Bryl is indubitable a Sullustan. His hairless skull and large round ears that poke straight out on either side of his big head are a much darker shade grey than his pale dewflaps, tiny nose and small chin. At full height Bex Bryl barely reaches a full five feet and he might be considered chubby only if one were inclined to be polite as he weighs at least a hundred and fifty pounds if not more.