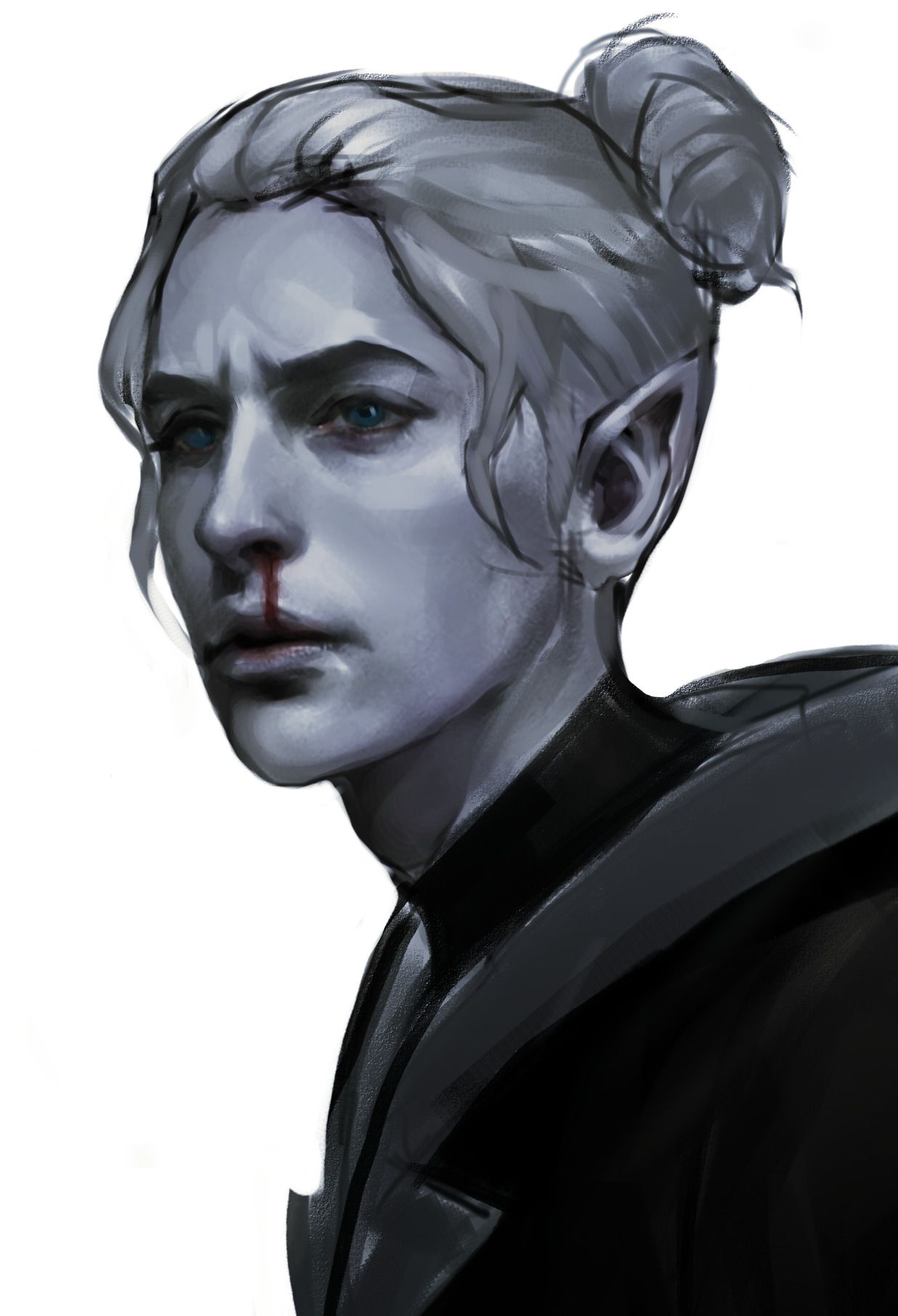 While possessing all of the base physical features and shapes expected of a human, there are some distinctly obvious characteristics that mark this male as being an Arkanian, or very nearly Arkanian. Incredibly pale, white skin with long, pure white hair being the most obvious features that can be seen at a glance. This figure stands at a a full head shorter than six feet tall, with a rather lithe and slender build to him. Contrary to his Arkanian kin, however, his eyes bear a cyan blue areola, and pupils that are proportinate to that of any Human.

Soft, plush lips draw the attention first, being faintly pink and almost pouty at times. An angular jawline with gentle cheek bones hold his facial features in a youthful display, topped with a sharp nose and dark lashes around his cyan eyes. Often times, his well kempt, long white hair is pulled up and neatly tied into a bun with a few strands dangling on either side of his brows. Along with his eyes to set him apart from other Arkanian's, he has sharp, pointed ears, usually exposed as his hair is pulled into that bun.

Having been born to Tanik Anruc, a noteable Arkanian bioengineer, and Ila Anruc ne Olban, the chief executive officer for a large Arkanian corporation that sold a large number of genetic research material, Rotas was the product of some genetic engineering himself. What was supposed to have been a research project to create an assistant tailored to Tanik's specific research needs, bore the result of an unexpected error. Unknown to Tanik at the time, the genes that Rotas had been created originated from someone strong in the Force. As a result, luck or the lack thereof would ensure that Rotas Anruc himself was sensitive to the Force.

After making a deal with the Sith Empire, Rotas was sold as a slave to become a Sith Apprentice on Korriban. Many of his years in the Academy were spent in the archives and the reliquary, where he developed his understanding of Sith Lore, and began meddling with Sith Sorcery. However, in a deceitful bid to keep his peers from taking advantage of him, Rotas always positioned himself in the middle of the class, never looking too weak to be easily taken advantage of, and yet never looking too strong to be a prime target.

Now that Rotas has began to open up, displaying his knowledge, skill and power for others to bear witness to, he is making a more direct bid for a Master, seeking someone who will train him in Sith Sorcery, and more specifically, Sith Alchemy. As a result, he found himself in the company of Darth Revan on a shuttle from Korriban to Dromund Kaas. On the planet, along the way to Kaas City, their landspeeder was attacked by a group of assassins. He, along with two other Sith Acolytes, and the Dark Lord of the Sith herself fended off the assassins.

As the situation grows more tense on Alderaan, Rotas finds himself joining in on the streets, searching for the right Jedi, the right Republic Naval Officer to possess a weakness he can exploit. Something he can take advantage of, and present to a future Master to earn his place as an Apprentice. When the King Alde first held the welcoming ball, inviting delegates from both the Empire, and the Republic, Rotas was there to bear witness to the event, and of course squabble with the Jedi. It wasn't long after that he bore witness again to the duel between Darth Revan, and a Lord Organa, in the Lord's attempt to dispel the Sith from his homeworld of Alderaan. The Lord Organa did not stand much of a chance, being bested rather quickly.

Eosys - Sixty-Three, as he has been marked. A brutal, Abyssin slave that serves as a fellow Acolyte. He is an ally, for now. Though, a rather dumb one.

Sith Acolyte: As a young, Sith Acolyte, Rotas has begun searching for someone to teach and train him further in the ways of the Dark Side, particularly pertaining to Sith Sorcery and Sith Alchemy.

Artifact Collector: Innately interested in history, especially pertaining to the history of the Sith, Rotas has a desire to collect relics, trinkets, tomes and other forms of memento to expand his knowledge of the Sith.