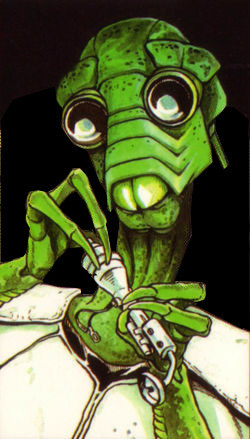 Upon reaching full maturity, Moe was assigned to R&D at Slayn & Korpil. It became a passion, an obsession, but it wasn't meant to last. Unfortunately, an accident damaged his antennae, leaving him near deaf in terms of the insectoid race. Exiled from the collective, he took it upon himself to secure a severence package and depart the asteroid belt. His severance package, an old and stripped-down freighter that they'd been using as a target decoy for fighter development. It was with this ship that Moe made it to Nar Shaddaa, where his new life will begin.