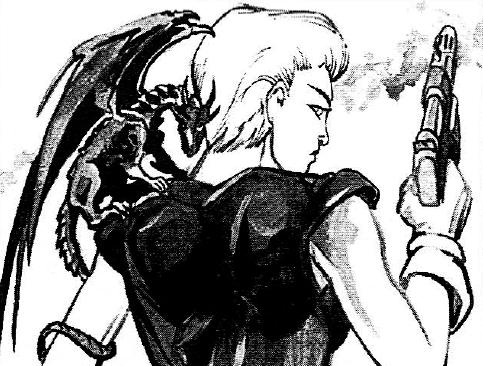 Adder was a gift from one of Ax's 'uncles' to the boy shortly after the Echani's mother died. Having been with the smuggler for nearly three decades, the two are rarely found apart. Generally shy, Adder sticks close to Ax unless Qadira Suuryet is around. She's likely the creature's second favorite person (and at times first favorite).

Socorran tail rings, also known as Socorran sand dragons, are symbols of strength to the many pirate factions living on Socorro. These desert dwellers exist in abundant numbers in the volcanic regions of the Doaba Badlands. While native to Socorro, they have been known to thrive in other ecosystems as long as the weather is hot and a plentiful suppiy of water is nearby.

Socorran tailrings live in hordes of seven to eight, with no more than two males co-existing at one time. These irascible creatures are surprisingly affectionate pets when domesticated. Once bonded to an owner. they are life-long companions whose loyalty endures even the most trying of times. Black fur is most common among tailrings. but varying shades of fawn and gray can also be found. Tailrings go through several stages of maturity. olting at each stage. Evidence of thelf age can be read by the rattles on their tails, each segment for each 10 years of life. Life expectancies range from 50 to 80 years. depending on environment and developmental factors. These diminutive creatures are highly prized for their rattles and their supple skins, but hunting them is strictly forbidden. The punishment for poaching tail rings is banishment in the deep desert with no provisions-certain death.

Highly intelligent. perceptive, and inquisitive Socorran tailrings are easily distracted by shiny objects; they are cunning thieves. They have few natural enemies. though on occasion Tailrings have been known to attack and kill mynocks. The reason for this peculiar behavior is unknown. Regardless, Socorran pirates value keeping one or more aboard ship in an effort to protect their crafts from infestation.