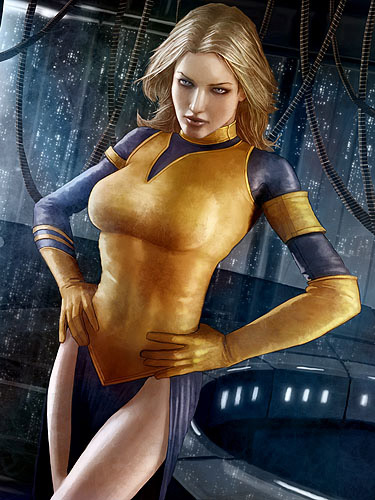 Guri is an HRD (Human Replica Droid) which means that even though she is a droid, it's almost impossible to tell that she's anything but a living and breathing human being.

Bodyguard to Prince Xizor and loyal Lieutenant of the Black Sun crime syndicate. Currently she is representing the Prince's interests on the smuggler's moon Nar Shaddaa, as his representative within the Hutt Cartel and Hutt Space in general.

Guri stands at five feet and eleven inches in her bare feet, with at least an additional inch lent to her height by the thick soles of her thigh-high boots. Her figure falls within the realm of unbelievably fit, and buxom, proving to be the kind of impossible beauty standard that only seems possible in heavily edit photos of already stunning models; her visage is, in a word, unreal. Her eyes are a vibrant blue color, and her hair is a sunshine blonde with highlights of argent, and lowlights of stunning gold, often left unfettered so that if falls in gorgeous waves around her shoulders, coming to an end somewhere around mid-back. Both her jaw and nose are strong, set, but it only serves to give her a regal air without passing into the realm of masculine. Her mouth is full, lush even, crafted for smiles, though this is a rare enough occasion to be akin to sighting a mythical craeture. Some people claim to have seen it, but there is no verifiable evidence that it has ever existed.

Guri is often clad in clothing that is form fitting, tailored specifically for her to flatter the perfect curves of her meticulously crafted figure.

All times are in EST.

As a feature character, Guri has been played by various individuals over time. This current iteration of Guri was started on February 28, 2019.