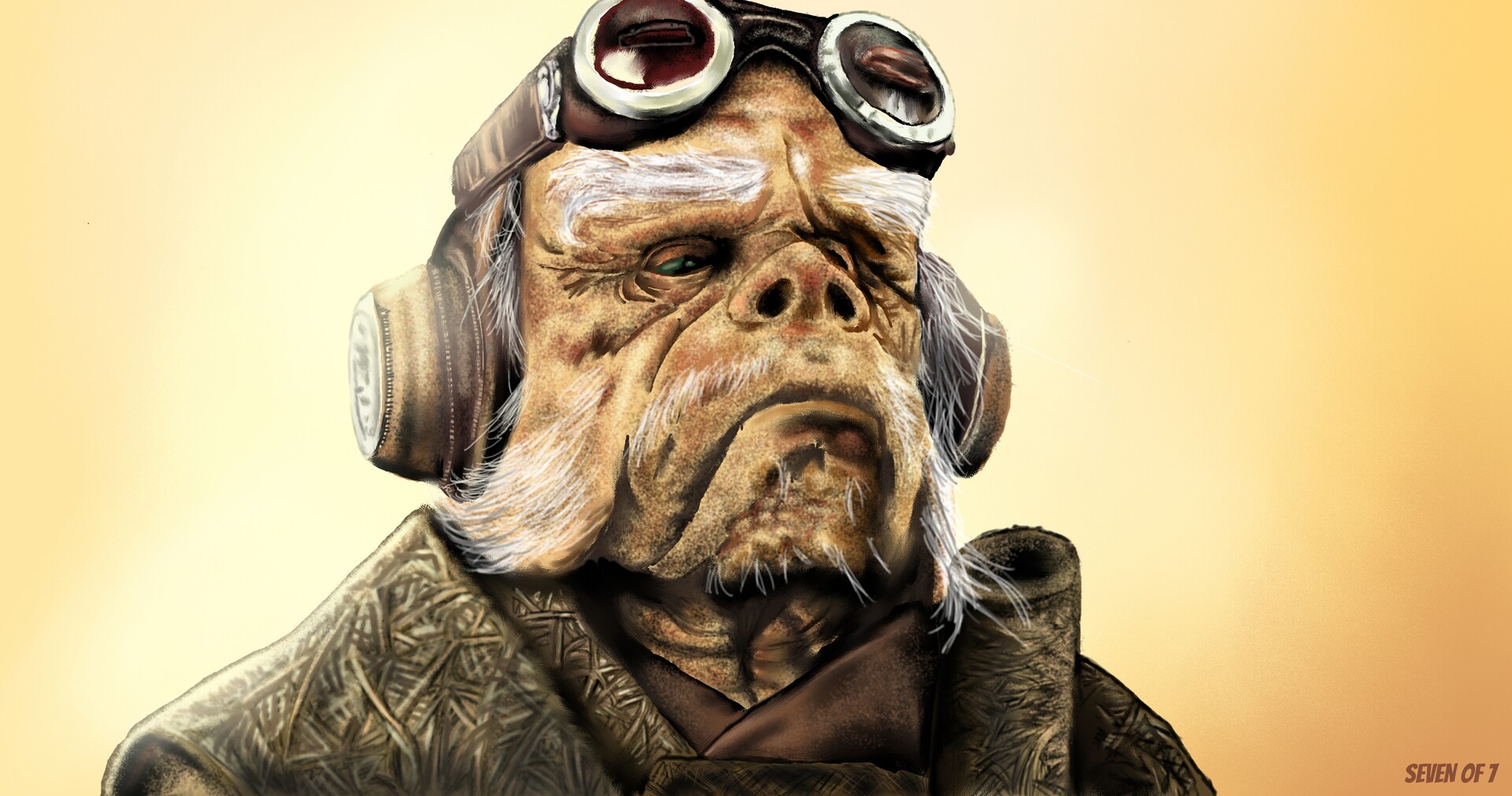 An Ugnaught and Guardian of the Whills, this wandering monk travels space seeking lost knowledge and treasures stolen from his temple, the Temple of the Kyber. He also fundraises for the rebuilt orphanage of NiJedha.

Born on the swamp world of Gentes but raised as an asteroid miner. His clan was one of miners and artisans, living among the stars to avoid the constant slave raids of Gentes.

Enslavement and the Clone Wars

During the Clone Wars his clan was enslaved. Forced to work in the asteroid mines of the Valsedian Belt, his people were rescued by the noble Jedis. It was then that Bizz felt the Force for the first time.

Bizz was banished from the clan after telling the Clan Fathers that he did not want to be an asteroid miner any longer. He left with nothing, wandering the stars as an itinerant starship mechanic. Like many pilgrims he found his way to Jedha. There he began studies of the Force and eventually joined the Guardians of the Whills.

Bizz became a monk and defended the Temple of the Kyber, a holy place of worship and learning in NiJedha.

The Guardians of the Whills were taksed with defending the Temple, but also giving aid and defense to pilgrims journeying across Jedha.

He also helped the orphans from the orphanage led by the Disciples of the Whills.

The Empire arrived for the Kyber crystals. Stealing some treasures and destroying others, the Empire sealed the Temple of the Kyber and tossed out its monks.

Bizz was entrusted with sacred data crystals and escaped off-world to save what little knowledge the Guardians had.

Later, the Empire destroyed NiJedha, calling it a mining accident.

Bizz fled to Bar'leth in the Core. Shedding his monk's robes, he became a simple janitor and maintenance worker.

He found another Ugnaught named Korin Pers, a Sava at the university. Pers gave him access to knowledge and historical training.

When Pers was forced out of the university and killed on a misadventure with Lando Calrissian, Bizz fled to Smuggler's Run, storing the Sava's books and data there.

University of Bar'leth in the Core Worlds

Bizz fled to Bunduki. There he lived with the Followers of Palawa and wrote a treatise on Teräs Käsi, the martial art.

He mastered the Dancing Dragonsnake stance, and became semi-famous for his modified Zama-shiwo-style Gundark Slap.

While wandering the Kathol Outback, Bizz was enslaved by an unscrupulous humanoid on Kal'Shebbol.

The slaver's trading vessel was destroyed by the Aing-Tii monks while traversing space.

Along with another slave, the Bith Maddie Macatten, Bizz took his master's Gymsnor-2 freighter SCUPPER BANTOO and fled to freedom.

Bizz and Maddie searched the Kathol Sector for the legendary Aing-Tii and their homeworld. Whether they found the monks, he would not say.


Study of the Tyia

Drawn by tales of the Revwiens, Bizz lived in the jungles of Revyia for a time.

He studied the philosophy of the plant-like species, called Tyia, which used the Force for peaceful means.

He refused to publish his treatise on the Tyia faith because of the potential danger to the peaceful Revwiens.

Bizz became proficient with the Vognallian seed pod - an exploding thrown weapon that showered an area with sharp seeds.

The sentient plants of Revyia follow the Tyia force tradition

Bizz journeyed to Bardotta and studied the traditions of the Dagoyan mystics, a sect of Force-sensitive advisors.

He was granted access to the Halsoun Monastery. As he was not a Jedi, the Bardottans were less suspicious of the wandering monk.

His book on the Dagoyan tradition was not published. But he did return to Jedha with a crate of Dagoyan meditative incense.

Mining magnates rebuilt NiJedha in the crater left by the Empire's weapon. Kyber crystals were still in demand.

Bizz now searches for lost artifacts to rebuild the Temple of the Kyber. Artifacts bring pilgrims, which bring money.

He also supports the Disciples of the Whills and their orphanage. Many children have lost their parents to mining accidents.

New Jedha City is rebuilt in the crater of old NiJedha

The poor and pilgrims still need to be defended by the Guardians of the Whills
Retrieved from "http://www.swaoa-mush.com/index.php?title=Bizz_Bliptettjupp&oldid=13536"
Category: