Born on the frozen planet Alzoc III, Lofty was a child when his entire tribe was enslaved by the Empire. He managed to get smuggled off the planet by a sympathetic smuggler delivering illegal goods to corrupt Imperial officials on the planet. He joined the Rebellion and was assistant quartermaster on Hoth; later, after learning a great deal of technology, he became a transport pilot for the Rebel Alliance.

After the Empire's defeat and the establishment of the New Republic he left service and returned to Alzoc III. Unfortunately, his tribe was killed in a mining accident.

For a time Lofty wandered the stars in his Muurian transport, trading with his friends. But an incident on Toydaria left him enslaved, until he was rescued on Nar Shaddaa by former rebel friends.

The Muurian transport "Glacial Floe" was an armed freighter purchased by Lofty after the Imperial Remnant was defeated and retreated to the Unknown Regions. After mustering out of the New Republic Navy, Lofty took to the stars to make his fortune. He modified the transport with larger engines and a med bay with a full bacta tank. Unfortunately the Talz was captured by slavers near Klatooine. His ship was sold and likely scrapped.

Rejoining the Resistance with his friends, Lofty has participated in numerous missions. To replace his ship, former smuggling friends found him a used star yacht that had been cruising the Tapani nebulae after being sold off by an eccentric infochant and smuggler. Now the yacht smuggles once again, but uses star cruises as a cover to transport Resistance materiel and personnel across the galaxy. Passengers tend to be wealthy individuals who wish to see the seedier side of the galaxy - from mobile shadowports and asteroid bases to the famous Nar Shaddaa. They have little idea that under their feet are Resistance supplies!

Tour the temples and towns of Kijimi, a wild planet of the Outer Rim!

Hoverskiing on the South Ridge of the Clabburn Range is the height of adventure. Advanced skiers can experience repulsor-drops onto Cirque Glacier.
For dinner, a succulent haunch of hoth hog prepared by Chef Milquetweed! Wampa insurance rider required.

A Sullustan smuggler from the Resistance cells on Piringiisi, Stebbs is Lofty's co-pilot, navigator, and sensor officer on the Alzoc, the Krak'jya, and sometimes the Free Blazer.

One of Lofty's favorite culinary locations. Though he cannot get back to Coruscant very often, with the war going on. The Cream of Fleek Eel soup (with live fleek eels!) and a nettle nut FizzyGlug are his favorites.

The FizzyGlug fountain can't be beat!

The Artists' High Commune was located on the planet Mrlsst in the Tapani sector. It was built at the top of Greenstalk trees and was the home of Mrlsst's misfits, artists, poets and dropouts. Members of Rogue Squadron used the commune to hide when they were implicated in stealing the Phantom Project ship datacards. Lofty drops by when he is in the sector. 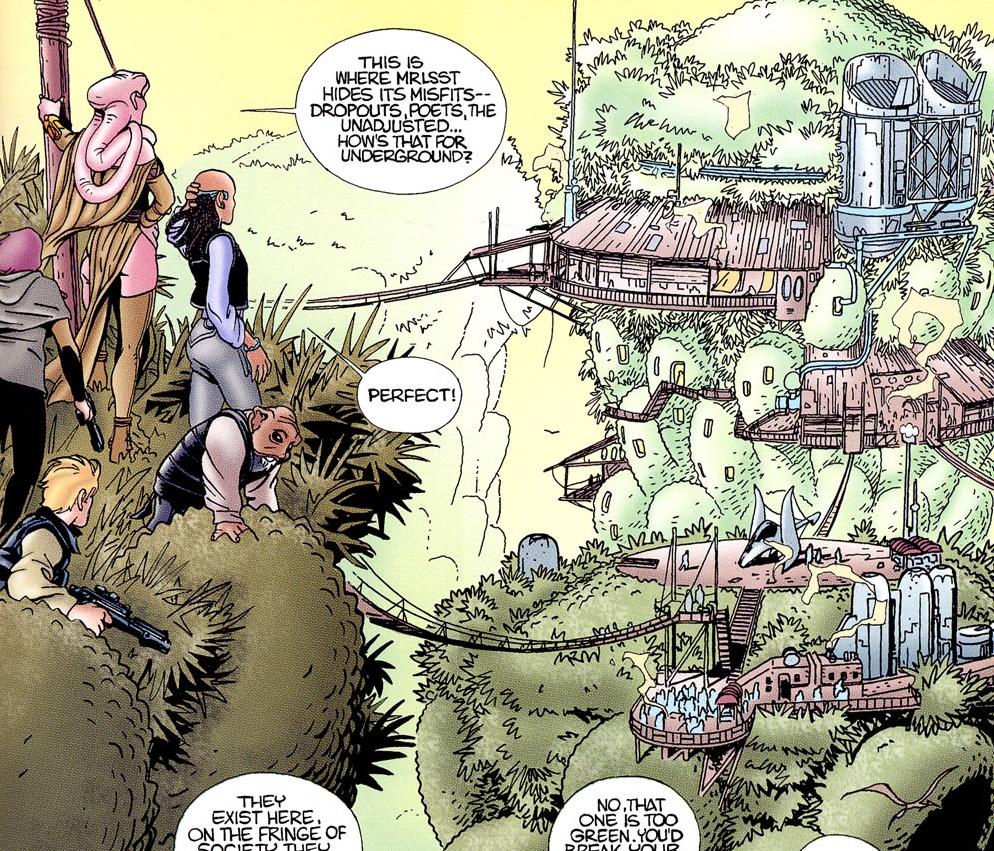